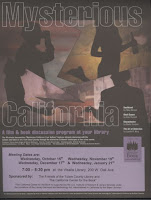 The Friends of the Library and The California Center for the Book will be sponsoring the next four Mystery Readers’ book discussions at the Visalia library. The first meeting, on October 15, will include a screening of the film Mysterious California: Four Authors.

Meeting dates and books to be discussed are as follows: