Independent Movie, For a Woman, Tue 1/24 at 6 pm, Visalia Branch 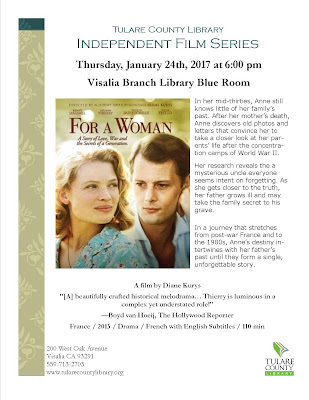 A film by Diane Kurys. "[A] beautifully crafted historical melodrama… Thierry is luminous in a complex yet understated role!” —Boyd van Hoeij, The Hollywood Reporter. France / 2013 / Drama / French with English Subtitles / 110 min
In her mid-thirties, Anne still knows little of her family’s past. After her mother’s death, Anne discovers old photos and letters that convince her to take a closer look at her parents’ life after the concentration camps of World War II.
Her research reveals the a mysterious uncle everyone seems intent on forgetting. As she gets closer to the truth, her father grows ill and may take the family secret to his grave.
In a journey that stretches from post-war France and to the 1980s, Anne’s destiny intertwines with her father’s past until they form a single, unforgettable story.